Learning From The Santa Fe Institute

If only we had perfect foresight and understanding. It certainly would make investing easy, but unfortunately, the infinite complexity of the world makes it impossible for us to make sense of it all. To help us cope with the complexity we develop mental models – short cuts or maps – that simplify what’s in front of us. These mental models become the tools we use to interpret the world, and while useful, they’re often but a crude guide to reality. Through curiosity, exploration and study we can upgrade our toolkit of mental models providing us a better window into the future. We can develop what Charlie Munger refers to as ‘worldly wisdom’.“

As Thoreau said, ‘It’s not what you look at that matters, it’s what you see.’” Warren Buffett

“The real voyage of discovery consists, not in seeking new landscapes, but in having new eyes.” Marcel Proust

What Does The Future Hold?

When it comes to investing and businesses, the mental models in our head help us answer the question, ‘what does the future hold?’ Ordinarily such models deal with businesses, industry structure, markets, politics, history, economics, etc. Ultimately, they manifest themselves in the numbers that fill an analyst’s or investor’s spreadsheet model. Devoid of the right mental models, or applying the wrong ones, is likely to result in failure. By way of example, applying the mental model of ‘mean reversion’ for a ‘fade-defying’ business model will lead to an erroneous conclusion. If the mental models are wrong, the spreadsheet model will be wrong. Period.

It’s for this reason that developing a broad ensemble of mental models can provide an investment edge; offering insights others can’t see. A striking example is Nicholas Sleep’s prescient analysis of Amazon some fifteen years ago. The recent FT article, “Cult figure of investing one of few to grasp early promise of internet stocks,” picked up on this: ‘what remains remarkable about [Nicholas Sleep’s] observations made more than 15 years ago is that many are only now starting to be accepted by mainstream financial analysis, while some remain controversial to this day’.

Nicholas Sleep is undoubtedly one of the best investors nobody’s heard of. His fund, Nomad Partners, delivered returns of more than 20 percent a year for thirteen years before he closed up shop to pursue more ‘caring pursuits.’ What differentiates Sleep are the diversity of the mental models he internalised and crafted into unique investment theses. Many of these mental models were drawn from a think-tank nestled in the Sangre de Cristo Mountains in New Mexico known as the ‘Santa Fe Institute’ [SFI].

If Charlie Munger, the epitome of a multi-disciplinary mindset, were to design a ‘think-tank’, the ‘Santa Fe Institute‘ would be it. Drawing on fields as diverse as physics, chemistry, biology, information processing, economics, political science and every other aspect of human affairs, the Institute endeavours to see the world as it is, a complex non-linear web of incentives and constraints and connections.In 2007, Nicholas Sleep discussed the Santa Fe Institute professor Geoffrey West’s work on ‘Scaling’ and the universal laws of growth, innovation and sustainability. Sleep proposed the simple elemental structure of scaling found in organisms might apply to companies, with specific reference to internet retailing and Amazon.

In 2010, SFI professor Ole Peter’s work on decision trees was utilised to clarify the risk a company poses as it moves down the various branches of future possible realities. Sleep concluded the stock market mistakenly prices all possible future outcomes concurrently, yet the range of future scenarios lessen as a company moves down each consecutive branch, leaving long-term success under-valued. 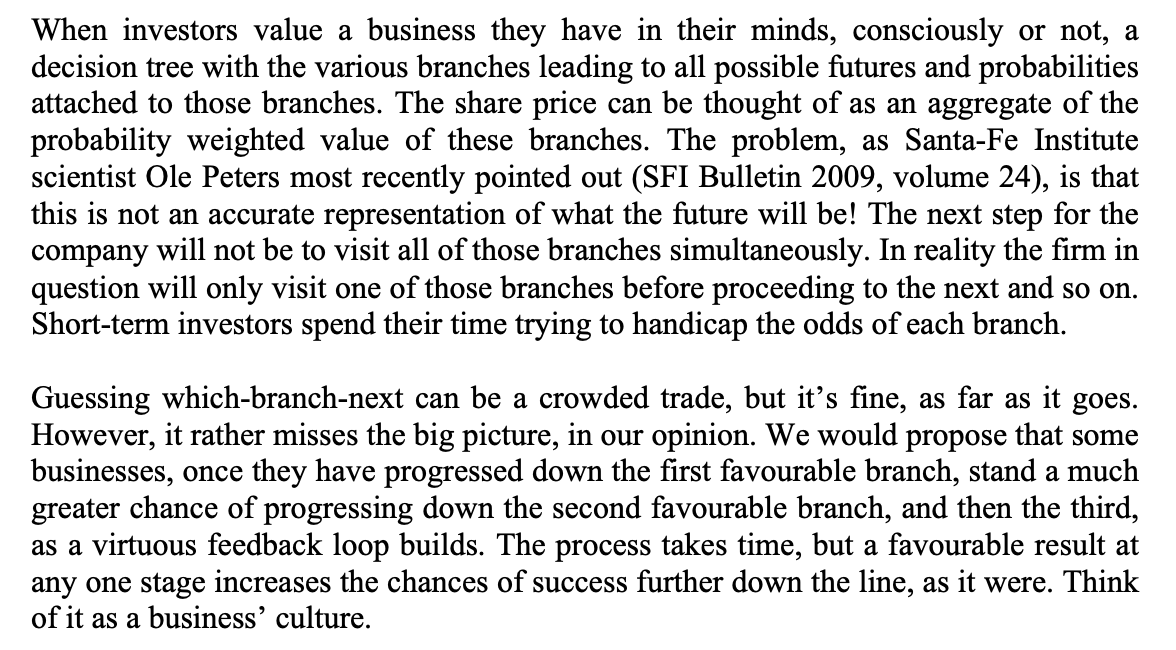 Nicholas Sleep is not alone in drawing on the learnings of the Santa Fe Institute. James Anderson, Josh Wolfe, Bill Miller, Michael Mauboussin and Chris Davis are passionate adherents. 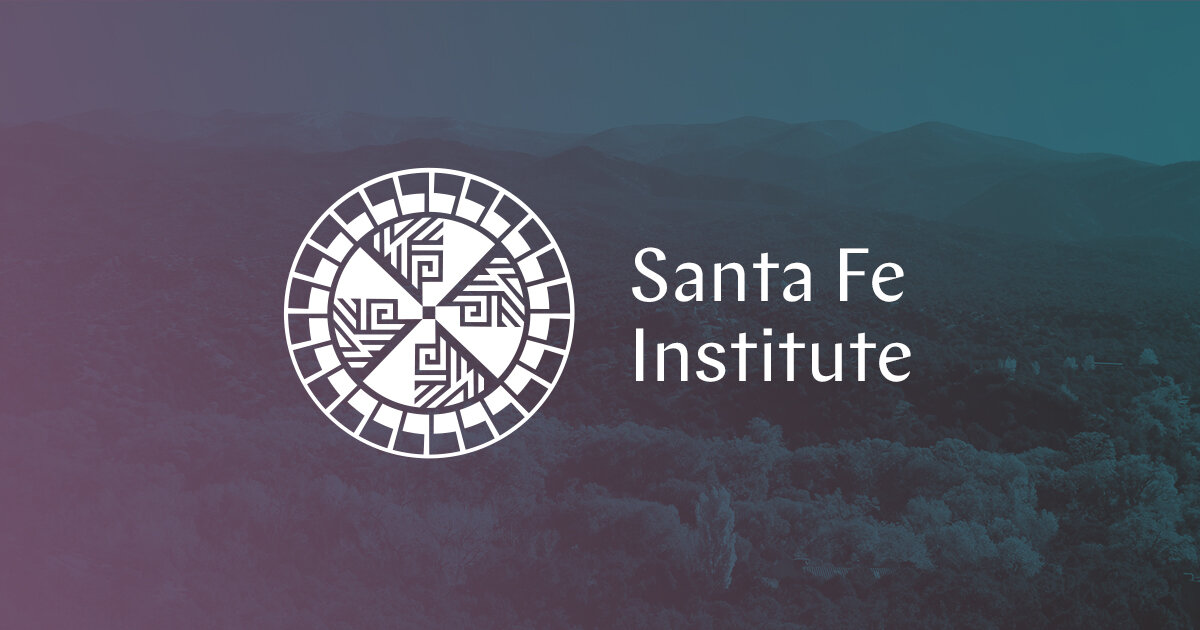 “It is my personal opinion that the thinking presented by Zeckhauser, and at the Santa Fe Institute should be thought of as the new economics in waiting, but it will likely only become mainstream consensus once the old guard has died off. The fact that these courses are still considered Moonie conventions and are rejected by the Harvard economics department shows how far away establishment, consensus thinking is.” Nicholas Sleep

“For a long time I’ve thought that the Santa Fe Institute was the best academic link that we have. ‘Best’ in almost every sense: highest intellectual calibre (as partially evidenced by how little I grasp), interdisciplinary devotion, collegiate atmosphere and obliquity. Yet Santa Fe has turned out to be directly relevant to how I, at least, invest. Indeed I can scarcely think of any significant investment I’ve made that hasn’t been fundamentally driven by ideas emanating from Santa Fe. From Brian Arthur’s views on the economics of increasing returns to Geoffrey West’s work on scaling, to Jessika Trancik’s tracking of innovation rates (especially in energy), to the basic notion of complexity itself, their thoughts have altered my mind a lot. In fact it’s simply been the most important material I’ve come across.” James Anderson

“You don’t come [to the Santa Fe Institute] to get an answer to something, you come here to understand things in a different way.” Bill Miller

Developing a diverse toolkit of mental models for investing is a proven path to success. Nicholas Sleep, Charlie Munger and James Anderson, mavericks when it comes to investment thinking, are evidence of such. The learnings these Masters have extracted from nature, biology, physics, psychology, economics, politics and complexity science have lead to investment insights and success others couldn’t see.

‘Wordly wisdom is a good phrase for the intellectual capital in which investment decisions are made, and at the end of the day, it is the source of any superior investment results we may enjoy.” Nicholas Sleep

The Financial Times article concluded, “the story of Mr Sleep is a reminder that a small number of investors who possess genuinely differentiated insights about the world can generate vastly superior results to the herd.”

Every single human being on earth is blessed with the power of thought. And every single one of us utilises our capacity for thinking every single day. Some of us are very good at it, yet others are not, and most of us will tend to hang onto the thoughts that have been presented to us during our education or working lives, and never question their veracity, accuracy or even relevance in today’s world. Even more, very few of us can attain the idea of an original thought; that is, an idea or opinion that has never been previously imagined in the past. But don’t be discouraged, even a genius like Nicholas Sleep has identified there is a body that can. So, if you’re looking for differentiated insights and vastly superior results, the Santa Fe Institute might be a rabbit hole worth venturing down.

Ask Larry: Will Changes In The Full Retirement Age Reduce My Social Security Benefit At 70?

admin May 21, 2021
One of the leading US-based cannabis companies thinks its US$130 million bet on Europe will pay off in the long…

French Castle Kept In The Family For Centuries Asks $2 Million

When The Pandemic Shut Their Second-Act Business

3 Ways Your Company Should be Customer Obsessed

House Hunting: Homes For $6.2 Million Near Vero Beach, Manhattan And…

Exxon Board Fight Escalates Over Company’s Stance On Climate…

Any cookies that may not be particularly necessary for the website to function and is used specifically to collect user personal data via analytics, ads, other embedded contents are termed as non-necessary cookies. It is mandatory to procure user consent prior to running these cookies on your website.